Examples of Shape Poems for Kids

Shape poems are an unusual form of poetry, in that the arrangement of the poem’s words on the page (or screen) forms a recognisable shape or picture. It is common for the poem’s shape to reflect the its theme or subject, but it is not a requirement. Some shape poems deliberately challenge this convention for humorous effect. So far, so simple.

Unfortunately, Americans have decided that shape poems should be called concrete poems. I have to say that I prefer the term shape, which neatly ties the poem's form to its description, so we'll stick with it for the time being.

There are two really quite distinct types of shape poetry, twisted and true. Twisted shape poems are easier and more fun to write, which makes them ideal for children. In the case of twisted poems, the words of the poem are written and then simply contorted or twisted to form the desired shape. I've turned the opening of the traditional nursery rhyme, Hey Diddle Diddle, into a shape poem so that you can see how the twisting of the words works: 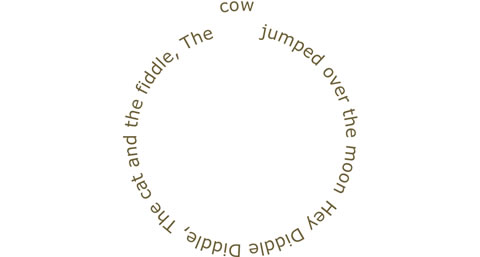 Some people think that twisted shape poetry is a cheat, because the same words can be twisted into almost any shape.

I must say I like the twisted form, because if you're unhappy with how the poem turns out first time, you can easily untwist the words and twist them into different shapes until you get the result you want.

A twisted shape poem which is in the
shape of an ampersand, which is an
abbreviated form of the word and.
by Patrick Winstanley

The Ghost of Christmas Past

Two twisted shape poems, or at least
one twisted and disintegrated shape
poem in the form of a Christmas tree
by Patrick Winstanley

True shape poems are a different kettle of fish entirely. In a true shape poem, the poet uses the differing line lengths to create the desired imagery. It can be a tricky and frustrating business. If you want to create a poem which rhymes and has a recognisable metre, you either need to select a fairly rectangular form for your poem or to cheat like mad. I think it's an acceptable cheat when creating a true shape poem in a complex shape to let the start of new lines fall wherever they fall. It can also be helpful to highlight the initial letter of each line in bold or a contrasting colour so that your audience know that it's reading a poem, rather than a very short, oddly-shaped novel.

Let's have a look at an example and everything should fall into place. In this case I've created a true shape poem in the form of a man in a hat.

I've also included a riddle in the poem, just to bamboozle you a bit further. Perhaps it's time to get out your I-spy Book of Hats.

The Leaning Tower of Pizza