Max's rude rhymes are nonsense poems for children which include the odd rude word, or rude idea. If you're 11 or 12, you'll probably think the poems terribly tame, but if you're any younger it might be a good idea to seek parental or teacherly guidance before embarking on them. The first poem, A Nonsense Confection, is a test of your and my ability to spot a rude poem. The first time I read it I thought it was sweet (it's about mints!) and innocent. On a second reading, I decided it was really rather rude. Now I'm not sure what I think, so I'll let you decide.

Show all the poems

A Not So Sweet Sweet Poem

A nonsense poem about a romantic relationship between two different types of mint. It's full of confectionary puns and some single innuendo, but it may at heart still be a clean poem masquerading as a dirty one.

Won’t you dance a little closer, said the Polo to the Mint,
I think I like the scent of you, so can you take a hint?
Let’s go off to the Chocolate Bar, the haunt of treacle tarts,
Where we can dance the Bon Bon Waltz and seek old Cupid’s darts.

I’m very sorry, Polo, the Mint she did reply,
But I cannot sing this song with you, our time does not draw nigh,
Please go and find a Monster Bar or a Jelly Baby’s soul,
For I am really not, you see, the Mint who has a hole.

Think of the suffering of the poor jelly baby next time you bite off its head and them chew through its neck. It's surprising there isn't a pressure group protesting for jelly baby rights. Or perhaps there is…

Oh sing not of the Kookaburra tree or the purple mountains of dawn,
For my love she lies a-bleeding, this cold and frosty morn.
Oh, my love she lies a bleeding, you’ve bitten off her head,
Her syrup flows all down your chin, and soon she will be dead.

We live inside your pocket, our home a cardboard box,
Our elbows jab into our ears like cattle at the docks,
So spare a thought for our kind, damned by agreement tacit,
And dispute our plight with the men in black, who work at Barrett Bassett.

The Purest of Nonsense

The title may promise more than the poem delivers, as it's only the presence of a stripper and a concert singer with poor bladder control that relegated the poem to the rude rhymes. Having said that, it's as mad as a box of frogs and well worth a read.

The custard sat upon the fat, the nursemaid counted three,
The moomrath jigged upon the mat while the stripper drank her tea.
The jelly danced the pas de deux, the wombat sang the blues,
And four and twenty bright young men went out in blue suede shoes.

The doormat sang a sad, sad song, the walrus played his horn,
And the colander felt water drain when a milk-white mare was born.
Three pussy cats did wail all night, two doggies barked in rhyme,
And Andre Diggs, the demon chef, swam in the Serpentine.

But alas, alack, the ghosts came back, and rattled their chain and ball,
And Annie Sprinkle peed all night, while at Carnegie Hall,
And so our story here must cease, our tale must surely end,
Or else go on for twenty years, and drive you round the bend.

A Poems About The Unfortunate Horace

Poor Horace is short, fat and smelly, and all his school enemies thinks he's weird. You'd think life could only get better when his fairy godmother appears. If only.

Horace Walpole Gladstone McGhee,
Was a boy who only came up to my knee,
His eyes were all crossed, his fingers all thumbs,
And he had three fat bellies and two big fat bums.

And all the long day, the children would yell,
Be off with you, Horace, you’re weird and you smell,
And Horace was sitting quite filled with despair,
When he heard a strange footfall on his mother’s back stair, 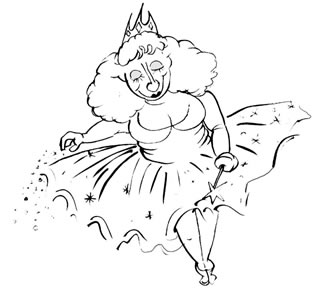 And there in the hallway, all glowing and white,
Stood his own fairy godmother, who gave him a fright,
Said Horace, have you come to grant me three wishes?
Nay lad, said the fairy, I just helps with the dishes,

For being a fairy is not what it was,
I’m fresh out of wishes, and here is because,
I’ll just help your poor mother to cook up some lunch,
I’m afraid I’m a victim of that old credit crunch.

Poor Oscar is a cautionary verse about a boy who farts so violently that he's propelled into orbit. It's not that Oscar deliberately eats mountains of baked beans, mush peas and rhubarb tart, it's just that he's much too polite a boy to say no to such fart fuelling fare.. 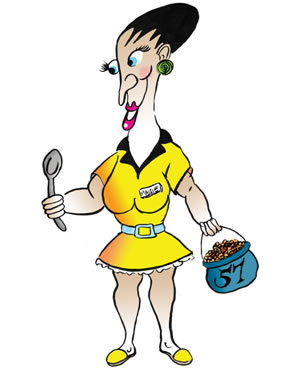 Oscar was a little lad who didn’t answer back,
So when they gave him double beans at Maisie’s Luncheon Shack,
He ate them up without a word and ate up all his seconds,
And held his bowl up out for more whenever Maisie beckoned. 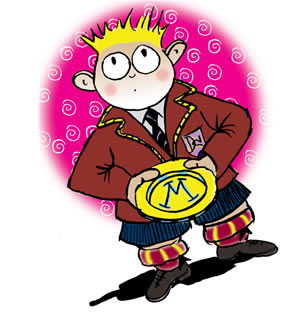 That night, at home, at time for tea, Mum served him mushy peas,
Instead of normal cheese and ham that’d graced a hundred teas,
And then they had stewed figs and cream and day-old rhubarb tart,
And by the time for Oscar’s bed he really had to fart. 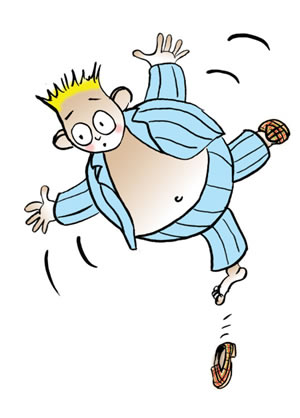 He held it in, he tried his best, but, alas, it wasn’t to be,
He blew the duvet off his bed and floated out to sea,
And they still see him, now and then, against the autumn moon,
And old men say, there goes that lad who ate the beans last June. 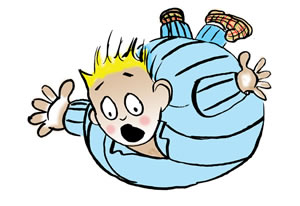