Are you ready to try something a little bit different? If you've visited our sister site, Funny Poems for Kids, you'll have discovered that Max Scratchmann's funny poems are often slightly strange or spectacularly silly. But Max's nonsense verse take you a step further, into a weird and wonderful worlds where nothing is as it seems. Fluttersnoops, talking tea cakes, gymnastic tigers and Joseph, a boy who thinks he's a goat, are just some of the oddities that await.

What is nonsense verse? 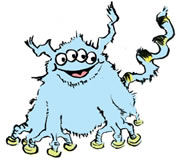 Nonsense verse is poetry that is deliberately topsy-turvy, paradoxical or weird. It's not complete gibberish, because it seems to make some sense when you first read it, but the more you think about it, the less sense it makes. Children, and adults with a childish streak, appreciate nonsense poetry for its inherent silliness. Sadly most school teachers, who are obsessed with understanding the meaning of poems, find nonsense poems unfathomable and so utterly abhorrent.

Finding your way around

Nonsense rhymes are sometimes so strange that it's a struggle to know what they're about. This makes it very difficult to put them into neat categories such as animal poems, school poems, sports poems etc. Instead, we've divided the poems into four groups: 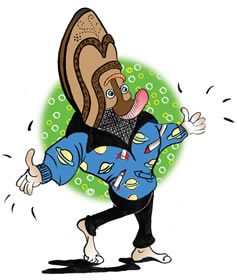 And if you can't find exactly what you're looking for, or worse you get completely, hopelessly lost, you could try the handy little search box in the left hand column, beneath the dancing sheep.

Delving into the past 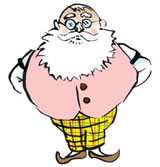 The ideal of English childhood is entwined with the nonsense poem. Whether it's the enchantment of Lewis Carroll's Alice in Wonderland or his slightly more testing The Hunting of the Snark, the terrifying morality of Hoffman's Cautionary Verse or the utterly baffling poetry of Edward Lear, few children escape exposure to nonsense peoms during childhood. The true masters of nonsense verse, Edward Lear, Lewis Carroll, Ogden Nash et al, are long dead, but are well worth digging up again in order to be touched by their brilliance, inventiveness and supreme silliness.

The 20th century produced a couple of sparkling English writers of nonsense verse, Spike Milligan and Roald Dahl, and a few American pretenders who frankly didn't cut the mustard. Moving rapidly into the 21st century, Max Scratchmann is amongst the very best of the current crop of nonsense poets. I hope you'll enjoy Max's collection of nonsense verse, which is traditional in style, but contemporary in its execution. I hope you will, but…

Will I enjoy the poems?

There are people who love picking their nose in public and others who think it's disgusting. There are a few people who tell everyone else that picking their nose is disgusting, but secretly enjoy having a good pick in private. Nonsense verse is a bit like nose picking. People who love it probably couldn't tell you why they find it so enjoyable. People who say they don't like it might just be saying it publicly, or they might really hate it. I'll confess I love it, and I quite enjoy nonsense poems as well.