Everything you ever wanted to know about the people who wrote the poems, plus a few things that you probably didn’t...

In reality, you already know quite a lot about me if you’ve read my poems and the other bits of the website. I like rugby and hippos.  I dislike spiders, swimming and cross country running. I really, really hate rice pudding. I can’t spell. I’m not very keen on teachers, but I do like writing poems that make fun of them. I was sent away to boarding school at the age of 7 and didn’t see my parents again until I was aged 18. OK, the last one isn’t entirely true, but it felt as though it was at the time.

To answer a few of the other questions that I sure you’re dying to ask me: lemon jelly, 6’3”, mauve, 1966, size 11, right, one sister, 16 stone, no, blue-grey. Not entirely helpful without the questions, but I’m sure you’re beginning to get a mental picture of me. Perhaps it would help to show you a photo? Unfortunately, every photograph taken in the past 35 years makes me look like a frog, so I’ve dug out a very old photo in which I look quite angelic (and only early stage frog). Strangely I really haven’t changed since the photo was taken (apart from the frog thing developing further) and you’d definitely recognise me if we met. 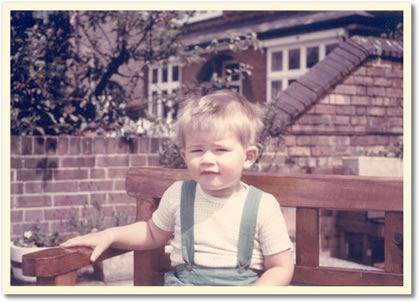 Alright, I admit I’ve been a bit silly so far, but this is really only the introduction to what should have been a very sensible and illuminating interview with my local paper. I allowed Timmy, my adorable little black cat, to be interviewed with me – a mistake, as Timmy is only happy if he’s the centre of attention. As you will be able to see, the resulting interview was nothing short of a catastrophe.

Paul is one of Funny Poems’ Poet in Residence, which means that he’ll be hanging around and contributing poetry to the site for quite a while. I must emphasise from the outset that Paul is a real person. Sue, who kindly proofreads the website  and corrects all my misspellings, thought I’d made him up. As if!

Paul is married, lives in Surrey and has written literally thousands of poems over the past twenty years. Sadly for us, most of Paul’s poetry is strictly for adults, but I’ve managed to find a few family friendly poems, and quite a few more rude poems, which are very nearly suitable for children. Paul has promised a much fuller biographical account in due course, but for the time being it must suffice to know that he really exists.

Graphic artist, illustrator, author and poet, Max Scratchmann specializes in nonsense poems and parodies. Max is a poet in residence at Funny Poems for Kids, although most of his poems have migrated onto the Nonsense Verse section of the website, where many are illustrated with his own drawings.