The Olympic Games is a fortnight long festival of sport held every four years. In 2012, the Olympics are coming to London, which means that even children who hate sport are expected to show signs of excitement, while true sports fans are going crazy with anticipation. To celebrate the London Olympics, we've put together a small collection of funny Olympic poems. The collection has something for everyone, mixing poems for sports lovers with poems for sports loathers and including the odd Olympic poem which isn't really about sport at all. There is some overlap with the the collection of funny sports poems, but the Olympic poetry collection include only poems about the Olympics or sporting events that feature at the summer games.

To whet your appetite, an Olympic shape poem which gives a potted history of the Olympic Games' 2,800 years of existence. All the facts in the poem are true, but it skips the boring bits (the games didn't take place between 393 BC and 1850), the horrible bits (Hitler behaved atrociously at the 1936 games, though there was worse to come) and most of the sporting bits. What is absolutely true is that when the Olympic Games were revived at Much Wenlock in Shropshire, England during the 1850s you could win an Olympic Gold Medal for poetry. Now, beach volleyball, rhythmic gymnastics and even football are Olympic sports. From the sublime to the ridiculous! 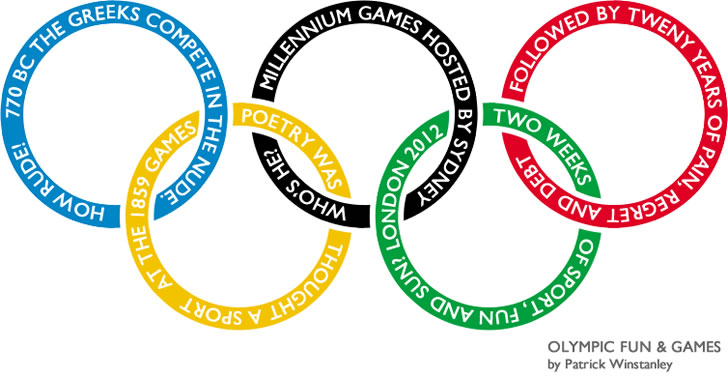 There are spectators who travel all over the country, sometimes the world, to attend their favourite sporting events and there are others who stay at home and watch sport on TV. Stay-at-home spectators are known as armchair sports fans and, as they tend to eat and drink a lot while they watch, they often turn into couch potatoes. Paul's opening trio of funny poems are about a couch potato trying to reacquaint himself with real exercise. It isn't something that can be rushed!

You must have an exercise regime
My doctor advised me
But he said it is essential
To build it up very gradually.
So for the first week
I am watching sport on TV.

You must have an exercise regime
My doctor advised me.
But he said it is essential
To build it up very gradually,
So for the second week
I’ve begun to do a little more.
I’ve started driving past
A sporting goods store.

You must have an exercise regime
My doctor advised me.
But he said it is essential
To build it up very gradually.
But by the third week
It started to get hard
As that’s when I started trying
To put on the leotard.

I’ve always wanted to learn to do the splits,
It’s an ambition since my earliest days.
The guy at the gym said, “How flexible are you?”
I replied, “I can do any day but Tuesdays”.

Another poem about getting ready for the Olympics, although this one focuses on the misfortunes of the Olympic squad that had to travel to the games by Ryanair.

The Irish Olympic athletes
Arrived in London by Ryanair,
But their baggage went to Lisbon.
They competed in their underwear.

We've arrived at the Olympics proper and a selection of funny poems which concentrate on the sports that come under the general heading of Track and Field.

Dash It All
by Paul Curtis

They called it the dash
Way back in the day
A short word for a short race
Dash was the right word to say.
Now they call it the sprint
Like its something elite
It’s still just a short race
That’s been hijacked by the efete

The Steeplechase
by Patrick Winstanley

The rowing events aren't the greatest of spectator sports, but they might be enlivened by the series of sudden medical emergencies, as portrayed in the poem Eight Little Oarsmen. The poem's title deliberately echoes that of the Agatha Christie classic, Ten Little...

The aquatic events at the Olympics range from the ridiculous, synchronised swimming, to the ridiculously dangerous, high board diving. At least the victim of Sink or Swim would have a fast track ticket to the paralympics (or the morgue).

Sink Or Swim
by Patrick Winstanley

Breast stroke, back stroke,
Butterfly, crawl.
It's sink or swim,
Winner takes all.

Back flip, half pike,
Somersault, splat.
Which joker let
The water out?

In Or Out Of Synch
by Paul Curtis

If a synchronised swimmer
Were to drown
Would the rest of the team
Also go down?

A poem with a dream-like quality from Max, in which he competes for gold in the Olympic tiddlywinks final. As if! Tiddlywinks is a game which requires skill, concentration and supreme athleticism, plus it's a game at which the English excel. For all these reasons, but particularly the last, it's never going to become an Olympic sport.

I sat down at the table, I did scorn the pitch and links,
For today it was the final, of Olympic Tiddlywinks.
The Blue Man sat across from me, his thumb was at the ready,
He eyed me with a gimlet eye, his gaze was still and steady.

I told him, flip your Tiddly, and get it in the cup,
Be sure your aim is swift and true, your ass I'm going to whup,
He took a flying counter and aimed for centre dish,
But the counter it went flying, he never got his wish.

I asked if he'd concede it, he answered, not a chance,
So I scored a double-treble, it was a brief romance,
And though I am a champion, I still scorn darts or judo,
But I'm getting into training, for next year's Olympic Ludo.

An English View Of Victory

While sport is all well and good, the thing that the English really excel at is a display of stiff upper lip. This is why so many English athletes deliberately avoid winning at the Olympics, so that they can win plaudits for their display of fortitude in defeat.

Be English
by Paul Curtis

Celebrate the victory
With your peers.
Drown the woes of foes
In English beer.
Sing loud the songs of triumph
Whisper low of near disasters
Be magnanimous in victory
Be humble in defeat
Be proud, be loud
Be English.

If all the brouhaha about the Olympics has proved too much for you, you'll enjoy Paul's poem Summer Season which explains why even the most ardent sports fan can develop feelings of ennui (a posh French word for boredom) for any sport except the one they truly love.

The summer started oh so well
With a Euro football banquet
Though sadly the home nations
Were unable to attend it
But the Euros inevitably led
To the curse of footie nations
The summer transfer market
And the incessant speculation.
After the Euros came Wimbledon
And I cheered on the plucky Brit
Then suffered our inclement climate
While being bored by the cricket.
I watched the windblown whingers
Hacking round at the British Open
Then courtesy of the highlights
I sat and watched it all again.
Then more newspaper talk
Of who will stay and who will go
Who is in and who is out
And more stories about Ronaldo.
Two weeks away on the costas
Helped to numb the pain
Then home to more paper talk
And of course more summer rain.
Even the upcoming Olympics
Fail to give me inspiration
Thinking of all that track and field
Merely deepens my depression.
The only thing to break my torpor
And to rejuvenate my heart
Is to hear that shrill whistle blow
And have the football season start.

And if you don't like the glorious game of football, there really is no hope for you...