The Fussy Poets competition was judged on Tuesday 12th November 2008 by Jean, who writes rude poems about my clothes, and Beth, who works in a school for very naughty children. The judges were very impressed by the quality of all the entries, but they were unanimous in their decision.

The winner of our Fussy Poets competition is... 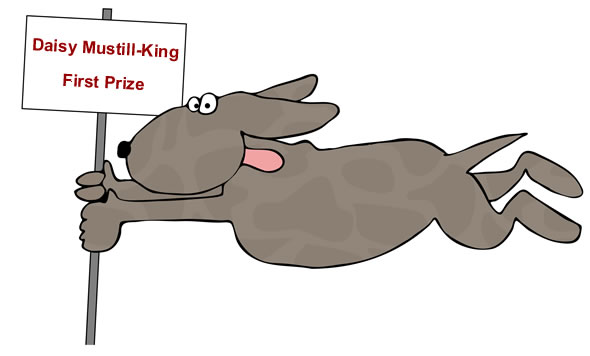 The Fussy Eater
by Daisy Mustill-King

We fight like mad at meal times
But I don't ever win
'Cause Mum says "If you don't eat up
I'll throw it in the bin."

An excellent poem by Daisy, which is all the more remarkable since it was written when she was only six years old. I particularly like the way the final verse has been turned on its head, so that the fussy eater doesn't win...

Daisy receives a £50 token to spend on some books of her choosing and I'm busy trying to persuade Timmy to tell me where he's hidden the chocolate sardines so that we can send runner up prizes to the other highly commended entries. I hope he hasn't eaten them!

The other entries in the Fussy Poets competion which received much praise from the judges were...

The Fussy Eater
By Hannah Lanyon

We fight like mad at meal times
But most of the time I win
‘Cause mum knows I’ll eat anything
If it’s got sugar in!

The original entry which inspired the competition and therefore a front runner. Hannah's version of the Fussy Eater has since been published in a Longman's school text book in Hong Kong, so Hannah's poetic future looks bright.

The Fussy Eater
By Sofia Bonetti

We fight like mad at meal times
Cos I'm a Bonetti
My Daddy comes from Italy
I only eat spaghetti!

Sofia is 8 years old and lives in Basel, Switzerland. Her poem was sent in by her teacher, Karen Evans, who describes her as a budding poetry superstar! I can only agree.

The Fussy Eater
By Jami3

My Dad calls me a fussy eater,
because I won't eat my greens.
But cabbage make me queasy,
and I absolutely hate beans.

We fight like mad at meal times;
My Dad goes in a mood.
’Cause He knows I'll eat anything,
As long as it’s fast food.

This poem was sent in almost anonymously - I don't know whether Jami3 is a boy, girl, or even an adult - but I really liked it, particularly as the poem includes elements of the MacFussy Eater. I've heard back from Jami3 - she's 13 and her real name is Jamie Dee.

Aliya, who comes from Egypt, has written an excellent poem. I particularly enjoyed the the win / within rhyme in the second verse.

Mum calls me 'the fussy eater'
Because I won't eat Brains
They're slimey and purple and really yucky,
And they give me stomach pains,

We fight like mad at meal times
But I will always win
No greens, no fish, no yucky brains
And definitely no Safety pins!

I really like Terri's poems - not only does it rise to the challenge of writing a poem about eating brains, but it paints an even more horrible, yet at the same time comic picture of a mother who might be tempted to feed her children on safety pins. By the way, Terri comes from Sheffield. Perhaps people behave differently there.

My mum calls me the fussiest eater
Which drives little sis to her knees,
'Cause she yearns to be so fussy like me
But she can't: she does love her cheese.

We fight like crazy at meal times,
Do my little sister and I,
To see who can eat the smallest...
Portion of mum's fishy pie!

Harry really has raised the game with his complete rewrite of The Fussy Eater, and what a triumph it is! Harry is 12 years old and lives in Oxford. At last, an entry from a boy.

We fight like mad at mealtimes
But mum never lets me win
Then daddy gets all huffy
And does our heads in!

A big thank you to Joeleen Bettini of Cairns, Australia, who told her friend PJ about the Fussy Eater competition and sent in the entry. Joeleen says of PJ 'She is 10 years old and a promising little writer!' A sentiment with which we would all agree.

The Fussy Eater
Laura Shepherd
Mum calls me the 'Fussy Eater',
Because I won't eat spicy food.
I find cheese makes my tummy turn,
and veg puts me in a mood.

We fight like mad at meal times,
But obviously I win.
'Cause Mum knows if it's not junk food,
i'll just chuck it in the bin!

An excellent re-interpretation of the Fussy Eater by Laura, who is aged 12 and lives in Redditch, Worcestershire. That's in England, should you feel the need to ask.

The Fussy Eater
Elizabeth Hernandez
Mom calls me "the fussy eater"
Because i won't eat broccoli
I find carrots make me queasy
And cauliflower makes me scream!

This poem was sent in by Elizabeth, aged 8, who live in Nashville, Tennessee (no need to ask where that is). The email had a beautiful background of a chimpanzee (which Timmy thought a bit scary) and ended

A fitting sentiment to conclude the competition!

Or so I thought, until this very fine example of The Fussy Eater was sent in by Ruhee from Ahmedabad, India, just two weeks before the competition closing date.

She scolds me often I must say
Be it breakfast or lunch
Then lovingly she offers me
Yummy carrots to munch.

Ruhee is 6 years old and studies in Grade 1 at the Zydus School for Excellence. She says she loves poetry and I think you'll agree she has a real talent for it.