Winners of the Winter Poetry Competition 2016/17

Some years the judging takes for ever, other years it's over in a trice. This year was an easy year, but not because I was judging it on my own (it's difficult to argue with yourself) or because of the limited number of entries. There were, quite simply, three outstanding poems among the entries. The winners and winning poems are:

I wrote this poem for a competition at school on the theme of ‘messages’, but I think it suits the theme of ‘Winter’ too. I spent quite a bit of time writing it and I really like it, I was 13 when I wrote it. My whole family has read it and so have the librarians and the English department at school.

Message from a Summer Past

This is it,
Soon I shall be gone.
Birds will leave my side
At this, my final song.

The days ahead grow shorter,
My mind is growing weary.
Little bits of life will die,
My eyes grow ever teary.

Snow will reign over all,
The bitter cold shall grasp me.
In an icy grave I’ll lie,
My captor, jailor is she.

One day I’ll return,
For now I breathe my last.
Summer caught by Winter,
My message from a Summer past.

Mya was shown a picture at school of a spiders web and was given the task of writing a poem about it.

When the Cobwebs are Frosted in Winter

A monochrome canvas of cold,
A vigilant spider hiding, not so bold,
Frost gnawing at the spokes of a spider’s freshly made home,
The cold is like a discernible dome,
Conquering everything in sight,
Moving in without a fight,
When the cobwebs are frosted in winter.

A frosty cobweb, jewel-dropped with icy spikes,
Jack Frost taking everything until he finds something he likes,
Cold, sharp zephyrs blowing hard,
Like a whetted knife, a jagged shard,
They’re nimble, jumping swiftly up a pinecone-like tree,
And parachuting into the stark blank sky,
Meandering through the freezing air,
Invisible to the naked eye.

The boy of frost is out to play, watching from so far away,
Watching silently with a shining grin,
There’s a spider cowering in the dark, the shadows consuming it like a shark,
The spider sees the shadow of Jack, the boy of frost,
He was here last year, and now he’s back…
It’s that time again,
That Spidey hates,
When the cobwebs are frosted in winter.

The poem was written by Josh in October 2016. The poem rightly received high praise from Josh's teacher, who is clearly a big fan of similes and asking difficult technical questions about the structure of poems. 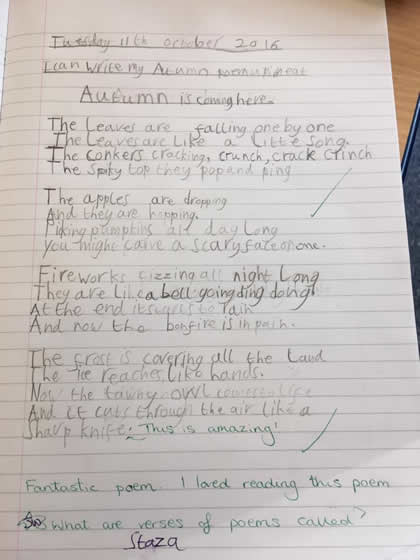