Another year, another children's poetry competition. The theme for the 2012 competition was sport in all its various forms and levels of exertion, from TV watching to long distance running. Strangely, considering the topical nature of the theme, we had fewer entries than in recent years and (whisper this very quietly) no poems written by boys. That said, we had received wonderful poems about a wide variety of sports. Funny, touching, technical; all sporting life was on display.

The competition was judged by Patrick Winstanley, owner and editor of Funny Poems for Kids, on 16th November with a little guidance from a furry feline friend. After much soul searching and a few changes of mind, a unanimous decision was reached.

The winners of the 2012 Kids Sports Poetry Competition are: 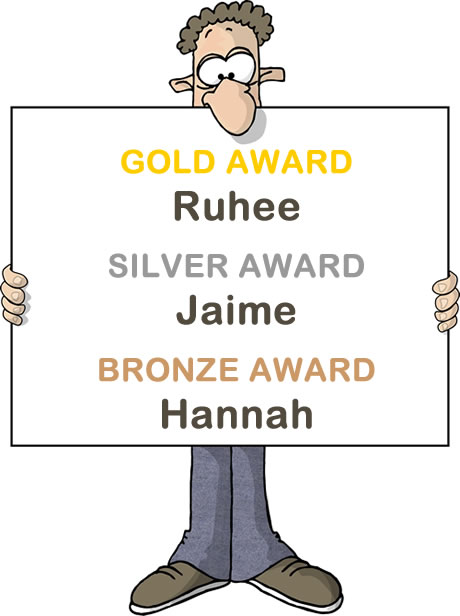 Our first prize winning poem, Centipede at the Marathon. was written by Ruhee, who is 10½ years old and live in Ahmedabad, India.

Centipede at the Marathon
by Ruhee

A centipede in the children’s park
One winter morning made a remark,
“Let me practice in the garden lawn
And take part in the marathon.”

“The task isn’t easy, it sounds uphill
But I’ll find out a way, since I have the will.
I’ll work out a healthy appetite
And practice rigorously from morn to night.”

As the days went by, his hopes went high
“I can’t afford to lose,” he said with a sigh.
Said his friends “If you call yourself a true athlete
You need to wear shoes and not run bare feet!”

“That’s a good idea” thought the rising star
And jogged his way to the nearest bazaar.
“One pair of shoes won’t be enough for me
Why don’t you pack up at least fifty?”

On the marathon day, he was late for the start
And so had to return with a heavy heart.
Tying one hundred shoestrings wasn’t an easy job
For all that he could do now, was just weep and sob.

Congratulations to Ruhee for her winning poem Centipede at the Marathon. The poem had much to commend it. Beautifully rhymed with a tricky aabb rhyme scheme, it has a coherent narrative and is really genuinely funny. Add a prick of pathos at the end and you've all the ingredient you need for a prize poem.

Please Mum,
Write me a note,
English is great,
And I love LOTE!

Maths is passable,
Science drags a bit,
But today is PE,
And you know how I dread it!

The boys get all sweaty,
And the sun is so hot,
My hair spray will run,
And the ball I will drop!

Mum, please write me a note,
Say that you will,
I don’t feel like running,
Or doing a drill!

Mum, I did enjoy it,
You said that I would,
It was great to do something,
And I feel really good‼

Jaime submitted two entries, but I was immediately taken by the conceit of Physical Education, in which Jaime writes from a viewpoint which is the opposite of her usual, sport-loving self. The poem is witty, well constructed and rhymed, but it was the vivid use of language that particularly impressed - sweaty boys and running hair spray are the very essence of sport. Dare one say it, there's also has a rather moral message about Mums knowing best. Great poem, Jaime.

Last but not least, our third prize winning poem is Always There, written by Hannah, aged 12, from Speldhurst, Kent, UK.

Always There
by Hannah

Whether it was tipping over my pram,
Throwing a cricket ball at me,
Waking me up very early,
Or just being an annoying brother.

Whether it was calling me names,
Pretending to kick me,
Chasing me round the garden for hours,
Or just being an annoying brother.

Whether it was hugging me when I was sad,
Making me laugh when it was needed,
Showing me places to explore,
Or just being an annoying brother.

I may stand accused of choosing the less sporting of Hannah's two entries for a prize, but I was really touched by Always There, which makes a tangential reference to cricket, but focuses on the popular sport of sibling rivalry. Non-rhyming and metrically challenged, the poem nonetheless tugs at the heart strings with its mixture of emotion about the unnamed 'annoying brother'. Well done, Hannah, and I bet you love him really, if indeed he exists.